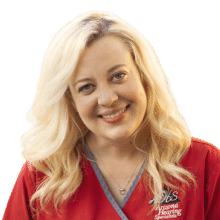 Rachel Noble, although relatively new to Tucson, has called Southern Arizona home for over 30 years. As the daughter of an audiologist, she received years of on-the-job training, from front office to the billing department, and everything in between. Years later, under his apprenticeship, Rachel went on to pursue her hearing aid dispensing license which she received from the Arizona Department of Health Services in 2009. Rachel is committed to efficient patient care. She believes that proper orientation at the beginning of a patient’s hearing aid journey, and continued support through routine maintenance is an essential factor in a patient’s roadmap to hearing success.