Not long ago, I had a close friend who told me that she attended a live theatre performance with her two granddaughters.  Her hearing aids were able to pick up what was closest to her….a young child sitting behind her who was eating from a plastic bag!

Therefore, all she heard was the rustling of the plastic and even after the child was done with their snack, she still couldn’t hear the stage dialogue because the performers were too far and the theater’s sound system was not in close vicinity to her hearing aids.

Now contrast that experience with another patient who was at the same show, but he had access to his telecoil (also called tcoil) while sitting in the back of the theatre. The hearing loop allowed him to hear the entire production as if he was sitting right next to the performers!

While all assistive listening systems bypass the acoustic space between the sound source and the listener, only hearing loops feed the audio signal wirelessly directly into the telecoil via electromagnetic waves.

When the user activates the telecoil to receive the transmission from the loop system, they reduce the effects of distance, reverberation and background noise, while maximizing the signal-to-noise ratio (SNR) between the person speaking and the person listening. 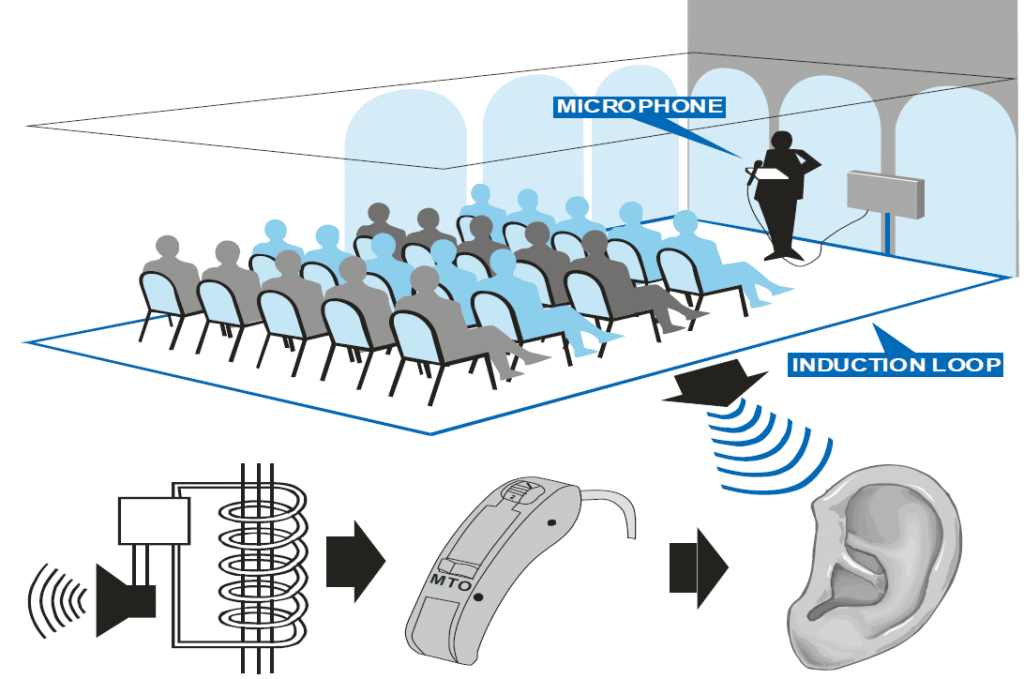 A recent study in the Hearing Review (September, 2014) showed significant improvement with loops in speech understanding in noise, reduced effort in hearing comprehension, enhanced sound quality, as well as increased perception of “naturalness” of the sound source.

Furthermore, 99% of the people with hearing loss indicated a preference for listening with the hearing loop versus without, and 96% of people indicated they were “likely” or “very likely” to use a telecoil in looped venues.

Why are hearing loops needed?

Today’s digital hearing aids enhance hearing in conversational settings.  Yet for many people with hearing loss the sound becomes unclear when auditorium or TV loudspeakers are at a distance, when the context is noisy, or when room acoustics reverberate sound.

A hearing loop magnetically transfers the microphone or TV sound signal to hearing aids and cochlear implants that have a tiny, inexpensive “telecoil” receiver.  This transforms the instruments into in-the-ear loudspeakers that deliver sound customized for one’s own hearing loss.

How many hearing aids have the telecoil (t-coil) receptor for receiving hearing loop input?

In surveys of hearing professionals, the Hearing Journal (April, 2009) reported that 58% of hearing aid fittings included a telecoil, an increase from 37% in 2001.

In 2014, the Consumer’s Guide to Hearing Aids reported that 323 of 415 hearing aid models (71.5%) were now coming with telecoils, as were 81% of models larger than the miniaturized completely-in-the-canal aid.

Moreover, according to a survey by the Hearing Loss Association of America (http://www.hearingloss.org/content/loop-technology), the greater a person’s need for hearing assistance, the more likely they are to have hearing aids with telecoils.

Loop Systems in Your Community

Thankfully, there are now thousands of places in the U.S. that have hearing loops and thousands with hearing aids Tucson installed, from airports to churches, from sports stadiums to tour buses and taxicabs…the number of looped venues continues to grow! Hearing loops are also being installed in living rooms and family rooms for enhanced audibility of the television.

Also, be on the lookout for the loop/tcoil symbol in your community as many places are already “looped” in southeastern Arizona!!